When I remember my dad, most of my memories center around dinners with him. Growing up, it was the one time of day when the family was all together and, in later years, dinner was a part of any visit.

When I see Don Draper of “Mad Men”, I always think of my dad returning home from work. Like Don, Dad was tall, dark and handsome… the quintessential image of a 1960s businessman. 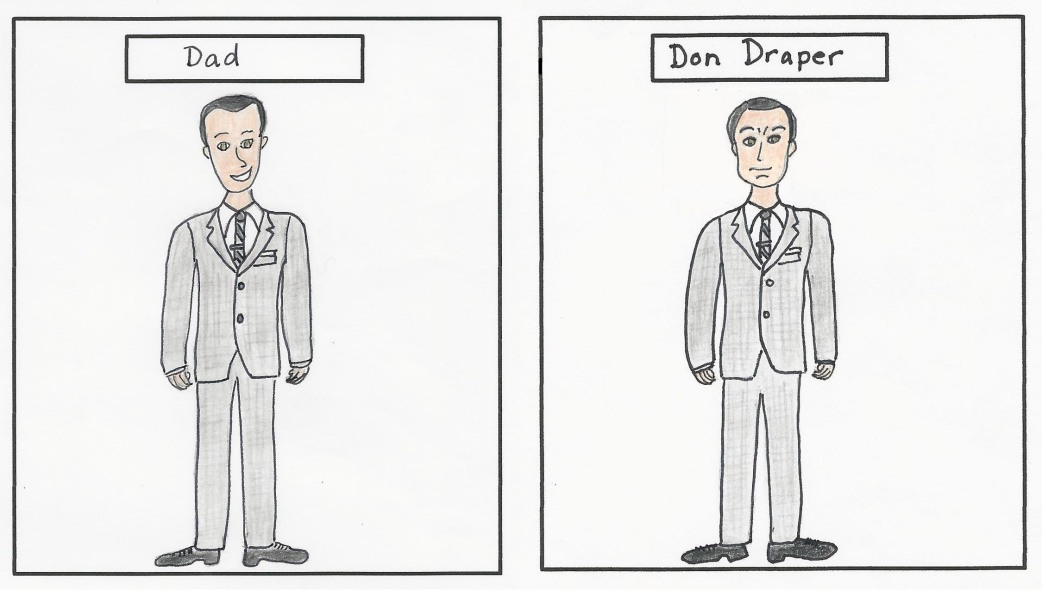 However, once Dad changed out of his suit into his “around the house” clothes, this resemblance disappeared completely. 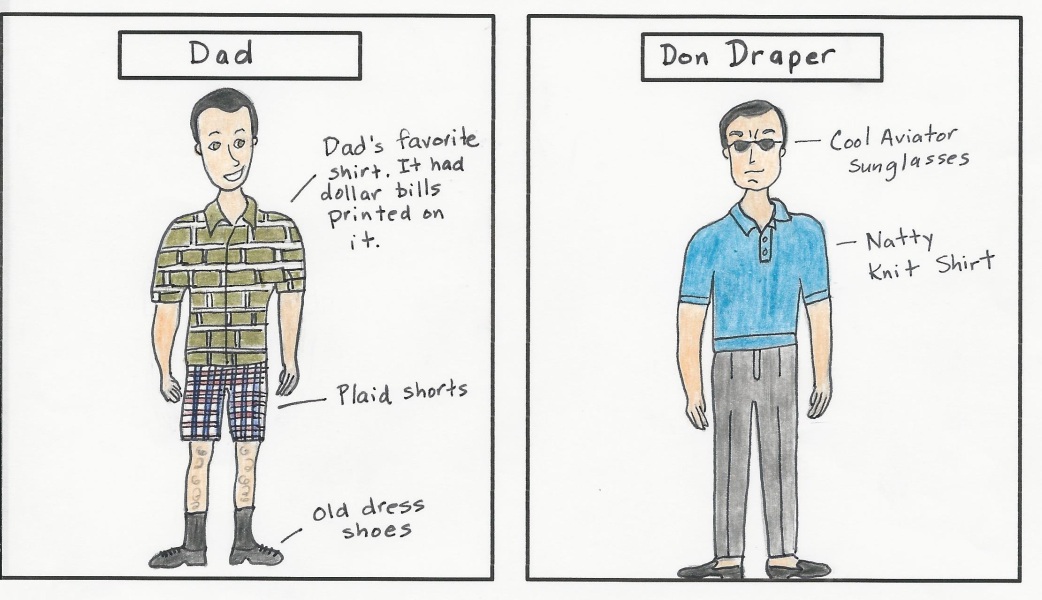 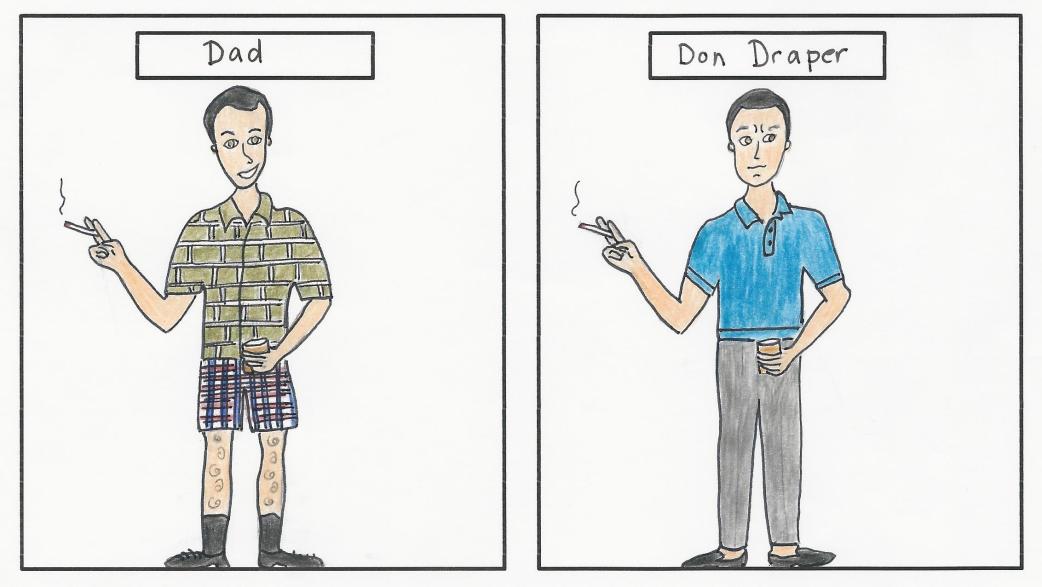 After Dad was out of his suit and done with his cocktail and newspaper, we sat down to dinner. Dad listened to our problems and shared his wisdom. 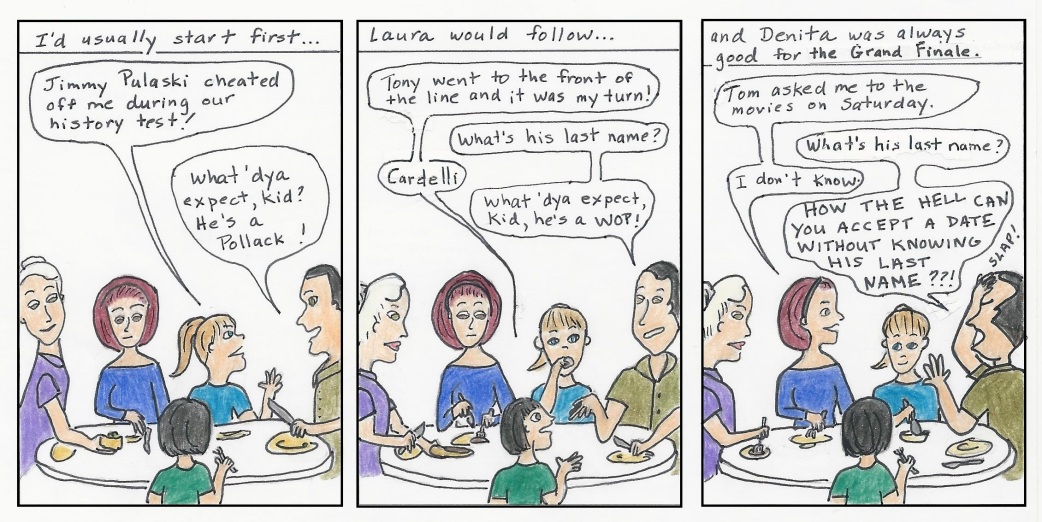 Once summer weekends arrived, dinner meant… barbecues with the neighbors!

When he finished his round up, he’d break the news to Mom.

The barbecues lasted long into the night with the strains of Andy Williams and John Gary crooning from Dad’s patio speakers. They were a summer staple at our house for over 20 years, but ended when Mom and Dad sold the house and moved into a condo.

We didn’t eat out at restaurants much, but there was one consideration that overshadowed all overs when we did.

After we daughters were grown with families of our own, family dinners shifted to our homes. These were the best years. Mom and Dad were (relatively) healthy, enjoying retirement and seemed to like us more as adults than children. Conversations were funny and interesting and Dad could be counted on to add life to any gathering. 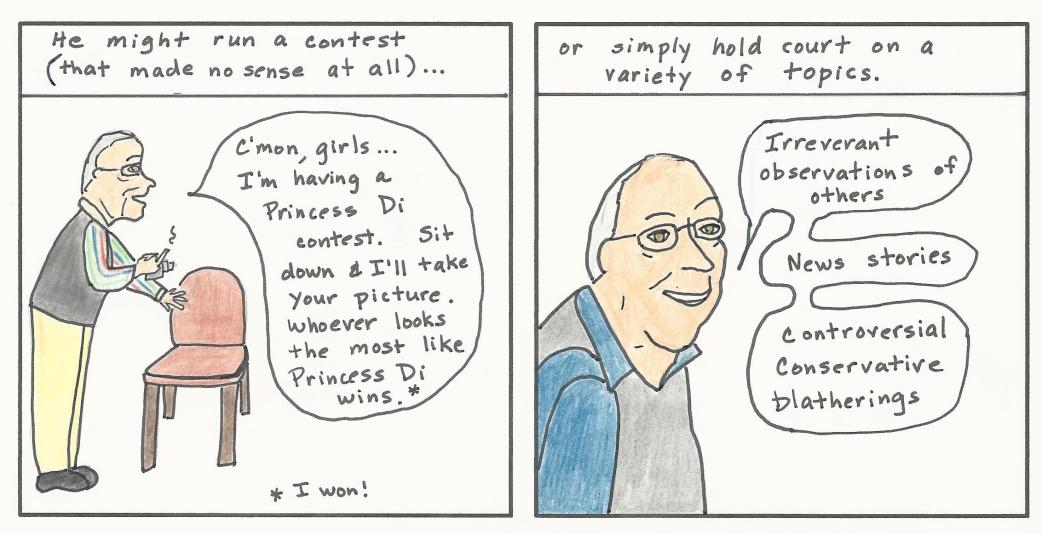 The years eventually took their toll. My dad lost most of his eyesight to macular degeneration and my mom lost the use of her legs to multiple sclerosis. Between the two of them, they tried to function as one person. 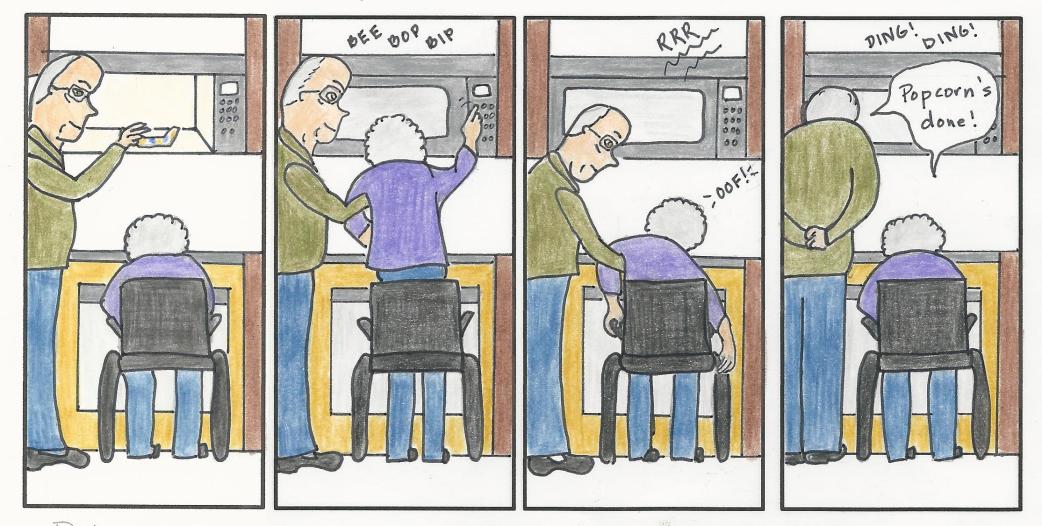 Dad was in charge of heating meals we had made for them, doing laundry, grocery shopping and taking care of Mom. He was all that stood between her and a nursing home and he did it without complaint.

When this became too much for them, Mom and Dad moved to supportive living, or “God’s Waiting Room”, as my mom called it. After Mom died, Dad’s “eyes” were gone and he was left to fend for himself. Meal times were difficult. Dad was too proud to accept help, especially offers to cut up his food. Watching him eat was excruciating. 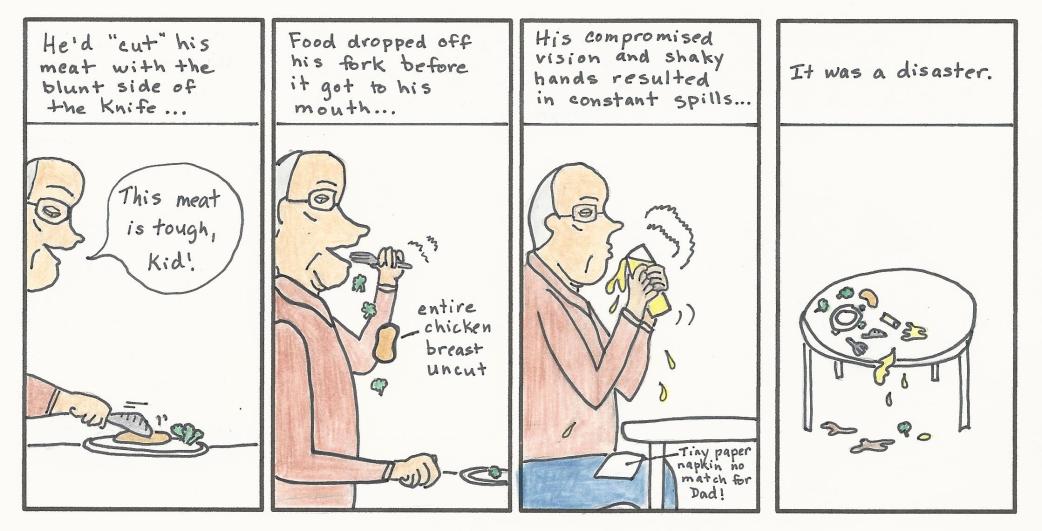 As we walked out of the dining room one day, I noticed a big wad of mashed potatoes which had fallen on to the tip of Dad’s slipper. I held back tears thinking of my handsome, Don-Draper-ish dad, now a frail old man with potatoes on his shoe. 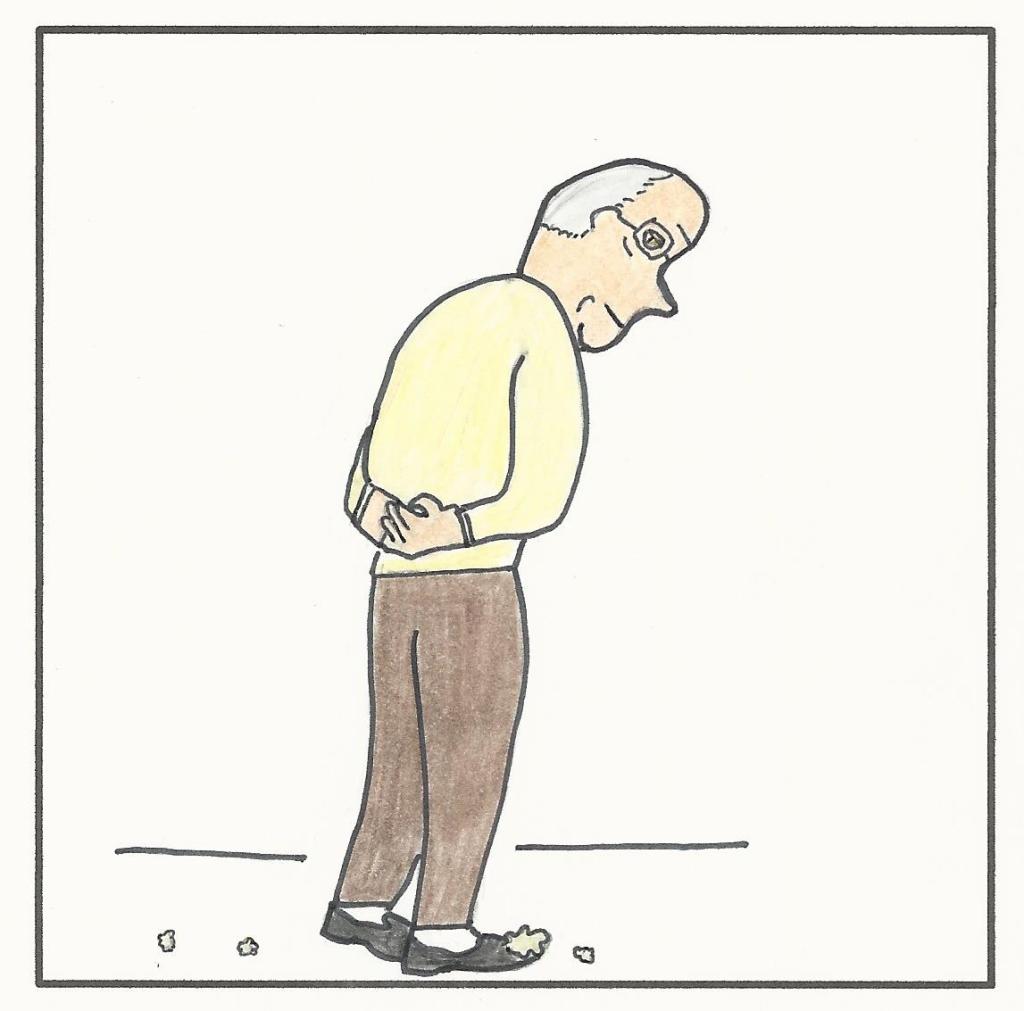 Not long after that, Dad started rotating through hospitals and rehab centers. As the clock wound down, I didn’t know if he was aware how close to the end he was. Our last dinner gave me the answer. 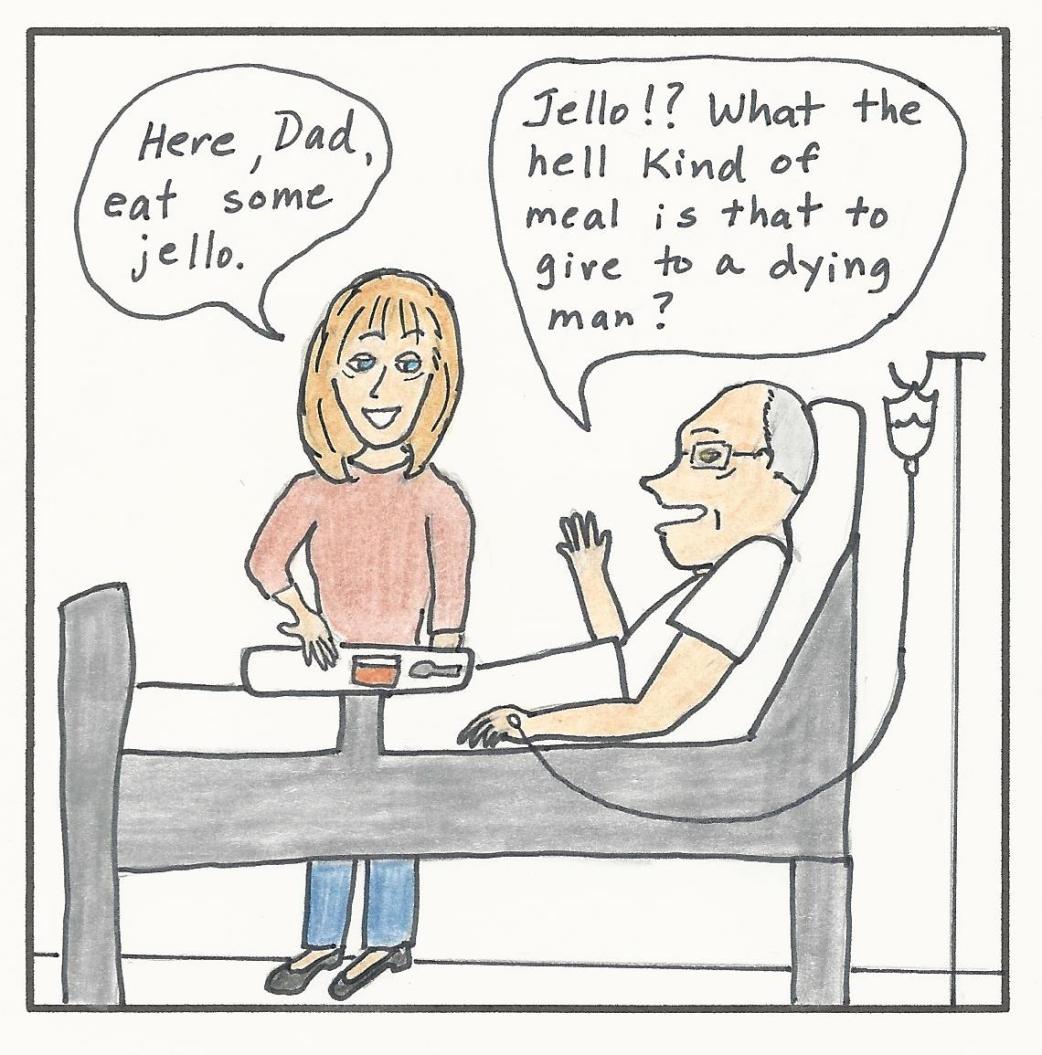 After I left Dad’s side that day, I never saw him conscious again. He died October 17, 2010. I still feel bad that his last dinner was orange Jello, but I am glad he had it with me.

Remembering my dad with much love today and wishing a very Happy Father’s Day to all the dads who make happy memories for their children.